America is on the brink of economic disaster. But the newly-elected prez has a plan! Dr. Eli Whitney IV has invented a new form of cotton that will revolutionize the garment industry, but there’s one small snag – it needs to be handpicked. And the president knows just who to press into service to pick it!  An American Ma(u)l turns its lens on two families, the Jeffersons and the Washingtons, as they struggle to survive in a “new” racially divided America. 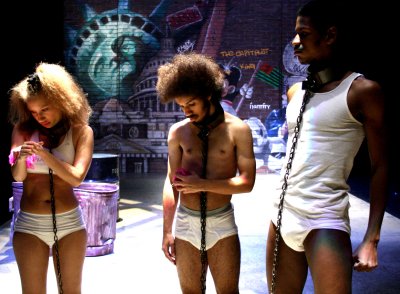 BACCE presents a hilarious and scathing political satire from playwright Robert O’Hara (Bootycandy).  An American Ma(u)l  explores the eerily timely proposition of what happens to an America in the face of an administration and a populous that will resort to drastic measures, like the revocation of our most treasured freedoms and protections, to save a failing economy. With Rotimi Agbabiaka, Andre Amarotico, Jennie Brick, Kehinde Koyejo, Aejay Mitchell and Cathleen Riddley!